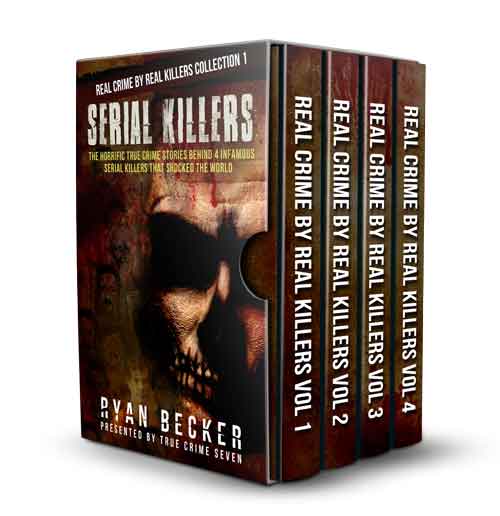 Famous actors, musicians, political leaders and the greats of science. There are stories told. Movies filmed. And books written about the impact they’ve made on the world. But…

This is a collection of different kind of people. People who are known not for their selfless, positive and genuine contributions, but the opposite…

In this set of four true crime books, you will learn about men who performed acts so cruel, so inhumanely heartless, so unfathomable that their names will never be forgotten.

This collection includes four of the world’s most known serial killers:

Edmund Kemper.
A rejected child whose traumatic childhood scared him for a lifetime. The only way he could deal with his pain was by inflicting pain on others.

Robert Berdella.
An ordinary man, appreciated by neighbors and a great lover of cooking, art, and culture, who turned into one of the most sadistic torturers to ever live.

Ted Bundy.
After taking dozens of innocent lives across 7 states and escaping the prison twice, he earned the title of America’s most wicked serial killer.

Look into the dark, hidden side of the impactful – their names are never said out loud yet will never be forgotten…

This is a well-researched collection of the darkness mankind is capable of. A definite page-turner for those who want to glimpse the darkness that resides amongst some of us

Great read! The way it is written allows the reader to immerse themselves in the story as if they are watching it unfold. It’s clear a lot of research went into this series and I enjoyed reading it!”